I seem to have slipped a day, so we start with Thursday, September 1.  This morning we took photos of our cherished Marche d'Aligre, just below.  You will notice perhaps a north African flavor.  Anywhere else in Paris, including at farmers' markets, we found prices to be double to four times as much as they were here.


For Friday and Saturday there are a few interesting pictures by Carolee, below.  This may be the day when we went to the 5th and up for a second try to see St-Etienne du Mont.  Missed again - we arrived 15 minutes after noon and it was shut down for the next four hours.  What now?  I was interested in seeing the most-visited Paris sight that Americans don't know about at all - the Chapelle de la Madonna de la Medaille Miraculeuse on the rue de Bac.  It's a pilgrimage chapel, and people come to buy medallions for good health and luck.  Closed, too.  But next door was mammon - the Bon Marche department store - and, with our American hats back on, we had a lot of fun checking out the fine groceries.


Sunday Sept 4, we took the Metro out to Parc de la Villette and the Music Museum.  It was pretty empty, but we had a lot of fun, entirely on the first and second floors with the Renaissance and Baroque instruments.  Classical, modern and folk instruments on the higher floors we ignored completely.  Of special interest: the Hemsch harpsichord that the one in my living room is copied from.

Monday.September 5, we went in the morning to the Louvre subterranean area to look for gifts.  Moderate success.  Heading back on foot we explored much of the Rue de Rivoli and then ducked over to the Rue des Rosiers to the Jewish section for what appeared to be a very popular falafel sandwich.  They were not real cheap but contained a massive amount of all kinds of veggies along with the falafel balls.  We schlepped them over to our favorite park, the Place des Vosges, and we and some of the pigeons there had a feast.  This was the very day that Dominique Strauss-Kahn had returned to his elegant home on the Place, and the street was full of television vans and antennas. What fun to be near the eye of history for a moment.


Walking the rest of the way home we spotted a truck with a boom for loading furniture in and out of walk-up apartments,  So that's how it's done!  Later, on a stroll down Rue Daumesnil along the Viaduc des Arts we spotted some extravagant light shades, apparently feathers attached to spherical paper oriental lantern shades - 800 or so euros each!

Tuesday, September 6, we made another attempt at St-Etienne du Mont church behind the Pantheon.  Viewing the very complicated facade I was reminded of a description by E. M. Forster of Santa Croce in Florence as "a building of consummate ugliness".  Right, consummate.  Inside it was also strange.  It's described as the only church in Paris which still has a rood screen separating the nave from the choir.  This may be so, but what smites the eye is an elaborate pair of spiral staircases, one at each side.  The upper portion of each staircase appears to lead to nowhere.  There is also the most elaborate carved pulpit that I've ever seen.  Off to the side is a memorial to Sainte Genevieve, the patron saint of Paris.  She was interred there for hundreds of years, but during the French Revolution her bones were seized by anticlerical forces, publicly burned, and the ashes tossed into the Seine.  There is still an elaborate metal and glass monument which looks like a sarcophagus, but what it holds is one of the marble slabs that was part of her sepulcher.  Pope John Paul II visited this site.


It was not too far from there to Carolee's long-time favorite restaurant, Le Volcan.  We had a great meal, and not expensive at all.

The day was rounded out with a visit to Val de Grace, an enormous church erected by Anne of Austria in thanks for the birth of her son, Louis 14th-to-be.  The young Louis got to lay the cornerstone for this monument to his birth.  Must have given him ideas.  A curiosity is that the church is just part of a museum to Army Medicine.  Since you can hardly call this a great draw, it's not surprising that there were almost no visitors, and we were well outnumbered by the museum staff.  These guys were anxious to help and to talk.  Well, you can imagine the boredom. 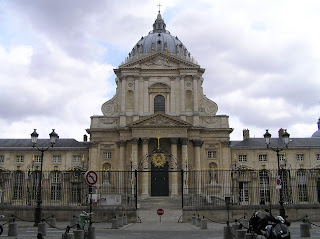